Carrying your Baby whilst Walking to Soothe and Calm

The posture for this week in Baby Bumpkin classes is Dolphin. This pose involves carers walking in a relaxed way with their baby (the relaxed walk). A recent study in Japan highlights the importance of just picking your baby up in your arms and taking them for a short walk round the room. Indeed, this may be the best way to calm them.

Researchers at the RIKEN Brain Science Institute in Japan (1) have discovered that young infants tend to ‘cooperate’ with their carers whilst they are being carried i.e. infants under 6 months, whist being 'walked and carried' will tend to:
It seems that the sensations of being held and feeling the movement of their carers against their bodies conbine to create a very effective soothing experience for the baby.

The researchers recruited 12 carers with infants between the age of 1- 6 months, setting  up each infant with a monitor so they could record their heart beat.

The carers were then asked to follow a sequence of moves with their baby for 30 secs at a time. These moves included:
The research team then gathered the information for the awake babies for the period of time when they were being held and then carried. Their results showed that when the mothers stood up and started walking - their babies tended to:
Thinking that the lower infant heart rate might have been entirely due to the babies moving and crying less the researchers conducted further experiments and found that this was not the case. They concluded that the reduction in heart rate seemed to happen as a result of another neurological process.

In their conclusion the team highlighted that:

For information on your nearest Baby Bumpkin or Tatty Bumpkin class go to http://www.tattybumpkin.com/classes/find-class.html

The Effect of Parental Stress on Babies and Young Children

There have been several articles in the press this week based on the results of recent research conducted in America on the effect of parental stress on young babies and children. The research certainly does make interesting reading....

Researchers at the University of California recruited 69 mothers and their 12-14 mth old babies and investigated the effect of maternal stress on their infants.

The infants quickly picked up on this parental stress response i.e.
In addition, the researchers noted that there are a variety of different pathways through which these stress emotions might be communicated, including odour, vocal tension, and facial expressions. They are now currently investigating the hypothesis that ‘touch’ plays an important role in emotion contagion.

Commenting on the study the lead researcher Sara Waters noted


"Before infants are verbal and able to express themselves fully, we can overlook how exquisitely attuned they are to the emotional tenor of their caregivers. Your infant may not be able to tell you that you seem stressed or ask you what is wrong, but our work shows that, as soon as she is in your arms, she is picking up on the bodily responses accompanying your emotional state and immediately begins to feel in her own body your own negative emotion."

Well nothing you do not know already – I'm sure! But this research does highlight the importance of Mums, Dads and carers:
Of course so easy to say but so hard to do - But I think these are two very good reasons for attending a Baby/Tatty Bumpkin class if possible!

In these classes you will get advice on relaxed handling techniques and how to walk in a relaxed way whilst carrying your baby (the ‘relaxed walk’) as well as having the opportunity to relax with your child in a supportive environment. 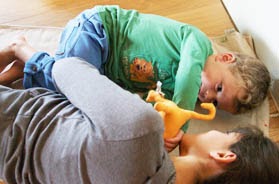 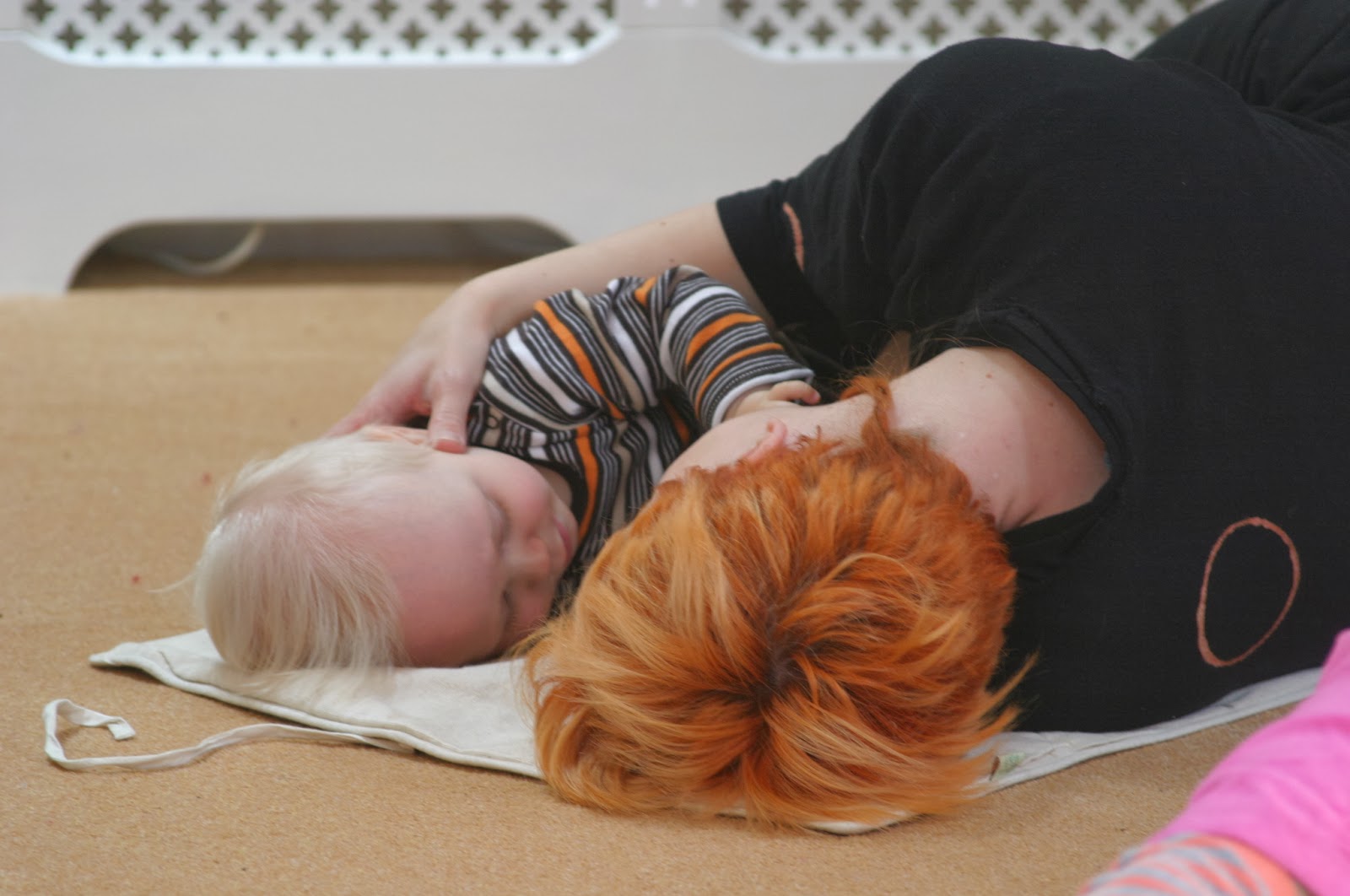 The posture for this week is Gloomy Cloud.

Find your local Tatty or Baby Bumpkin class at http://www.tattybumpkin.com/classes/find-class.html and have a go at Gloomy Cloud pose with your baby, toddler or child at home – see details on the pose below.


The Adventure This Week ..

This week Tatty Bumpkin finds herself under a ‘Gloomy Cloud’ as he tells her his sad story, she feels his raindrop tears on her arms and legs.

What’s the matter? Gloomy Cloud is fed up with making everyone sad – he wants to make people laugh instead!

Of course Tatty Bumpkin wants to help and, after a little think, she comes up with a truly awesome plan ..the Gloomy Cloud can turn himself into different shapes .. perhaps he can be a ‘cloud rabbit’ or even a cloud train – that would be really funny!


In the Gloomy Cloud story your child will have the opportunity to:

1. Practise their breath control and communication skills as they do Gloomy Cloud pose
2. Develop their core stability, to improve their balance, as they do frog and tree poses
3. Develop their early writing skills, by increasing activity in their shoulder muscles, whilst   doing horse and rabbit poses
4. Use gestures or words to express their thoughts i.e.
5. Come up with their own ideas on cloud shapes and then share them with the group
6. Develop their sense of rhythm as they jump to the Tatty Bumpkin Frog song
7. Have fun with their friends – cheering up Gloomy Cloud! Hopping as rabbit shaped clouds, or maybe being cloud trains and boats altogether,

Note: It is always best to do Gloomy Cloud pose with your child or toddler so they can copy you; this is especially true if your child is younger. Recent research shows that doing activities together helps the bonding process between parents/carers and their child.


Want to Make it Harder?

Cloud Shapes.- Spark your child’s imagination by encouraging them to lie down and look up at clouds the sky. Ask your child what cloud shapes they see – do they see a dinosaur/monster cloud shape? Or maybe one that looks like a space ship or even a cream cake?! Together make up your own adventure story about the cloud shapes you see.

Why Gloomy Cloud Pose is ‘Good for Me’ - Children and Toddlers

1.Often it is useful for your child or toddler to explore their emotions and realise that they do not have to feel happy all the time.

2. Whilst doing Gloomy Cloud pose with you, your child can:
3. By talking about emotions with your child, as part of a game, you will be helping your child to:
Remember to follow a ‘sad’ face with a ‘happy’ face!

If you are doing the Happy/Sad Cloud pose with your baby with the help of a partner:

If you’re doing the Happy/Sad Cloud pose with your baby by yourself:


Other Games with The Happy/Sad Cloud Pose for Babies

Copying your baby’s expressions – When your baby changes their facial expression during their day take time to copy what they do e.g. if your baby laughs and gurgles - respond to them by laughing and smiling or if your baby starts to look sad and cry - make a sad face whilst attending to their needs.

Play at being Happy/Sad Clouds through-out the day - During the day, when your face is normally close to your baby’s, grab opportunities to play the Happy/Sad Cloud game e.g.  when you are dressing your baby, changing their nappy or just giving them a cuddle .

Happy/Sad Cloud peek-a-boo!  See above in the section on games ideas with children.

As you do the Happy/Sad Cloud pose with your baby you will give them a chance to:

1. Develop their close bond with you. Your baby’s soulful gaze is almost a survival reflex as it is specifically designed to gain your attention. It is the start of your baby expressing their love for you as they realise how important you are to them. The first time your baby responds to you with a wonderful smile is a magical moment.  It is their way of saying "I love you."

In Tatty Bumpkin classes we use unique storylines to make the activities meaningful and to fire the imagination.

All our classes are multi-sensory comprising of:
We have carefully linked each Tatty Bumpkin to the new 2012 Early Years Foundation Stage framework. Supporting children to learn 'how to learn' - a life long skill

Posted by tatty bumpkin at 3:45 AM No comments:

tatty bumpkin
Tatty Bumpkin is the bendy, giggly world for strong bodies and clever minds. Tatty Bumpkin is a character at the centre of a creative, developmental yoga programme aimed at babies and children up to 7 years. Tatty Bumpkin was created by Yoga teachers, educationalists and paediatric physiotherapists to create a new way of encouraging children to move and explore their potential through play. The classes are run through a national franchise, in private classes, schools, nurseries and all manner of child friendly occasions!